You are here:
China - englischGeneral 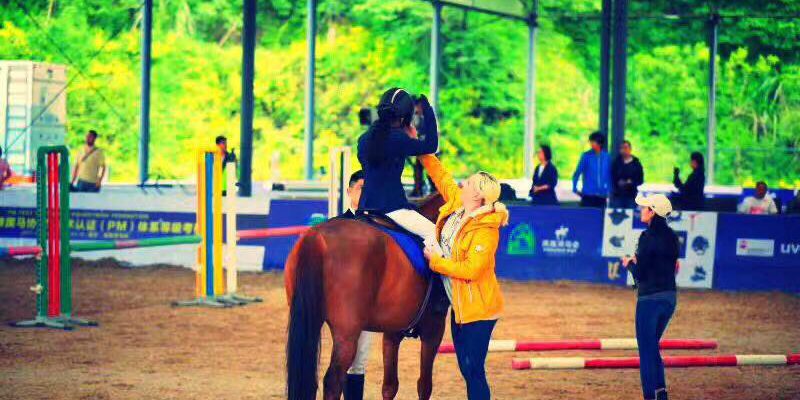 Ruixue Sun in a Conversation with Melina Schwaab

More than 5,000 years ago, horses were domesticated in China. In Chinese culture, the horse is a sign of success, strength, and diligence. Today, with around 9 million horses and 400,000 riders, China became the 14th league district of Longines FEI World Cup Jumping in 2011 and it has been a venue for the Longines Global Champions Tour since 2014. However, Chineses riders haven’t won medals in the Olympics or the World Equestrian Games. In order to bring China’s equine industry in line with Europe, the introduction of European horse experts is indispensable. Melina Schwaab is one such horse experts with a mission of developing the equestrian sports in China. Growing up in a family farm with horses in Germany, a country with a long history and well-founded education of the equestrian sport, Schwaab has been interested in different cultures and discovering new things since she was young. The cooperation with the Qataris when Schwaab was working as a rider for top show jumping stables piqued her curiosity about foreign countries, especially about Asia. China was the most attractive to her because of its fast development in the last few years which made her decide to work as a professional rider and coach in China. After a year involved in the Chinese Equine Industry, the great food and nice people convinced her that working in China was the right decision. Schwaab used to work for the Phoenix Bay Equestrian Club in Chongqing and now she is working in close cooperation with  private Chinese clients. Her project in China is extensive. One part is the discovery of young talent to whom she provides opportunities to train and compete in Europe so that they can bring home European show experience and help develop the facilities in China. The other part is the training and education of talented Showjumping horses, who will later continue their career with Chinese Riders . Schwaab also teaches the professional riders and coaches as well as advises the riding club management so that their own operations are in accordance with the German standard. To get Chinese riders and coaches certified internationally, the PM test of the German Equestrian Federation, an international licensing system, was introduced to China. Schwaab promotes this program in China by coaching both the theoretic and riding parts of the test and facilitates its conduction. She sees so many young, talented kids with passion and feeling for horses and she believes that it’s very important for them to get the right education from the beginning. In Schwaab’s opinion, Chinese families are usually lacking sufficient knowledge of the sport at first, but the kids always convince them how great horseback riding is. “Chinese parents never spare to invest in their children so that they can become professional riders. ”, she said.

The 2010 Asian games in Guangzhou was the first time an international equestrian event was ever hosted in mainland China. The number of top shows above the national level hosted in China reached 46 in 2013 but still didn’t reach 50 by the year of 2015. In comparison with Europe where several international shows take place every weekend, China has much room to improve on its ability to host international shows. According to Schwaab, the Europeans success of their top shows is inseparable from the popularity of the sport. What China needs to do is inspire more participation in the sport so that there could be a large audience for the top shows. Schwaab sees a huge potential for China to become a riding nation as its average annual growth rate of equestrian club membership is up to 33%. The intercultural communication skills are also very important for both the riders and the event coordinators. According to Schwaab, “Communicating with other top riders is the most rewarding experience in the international show which cannot be achieved without an open mind of different languages and cultures.” In terms of event coordination, Schwaab says China has already done well in the right direction and it could bring in more European horse experts to help, especially in the ground supply, show course design and facility organization. “Everything should be practical, sometimes not everything goes like it was planned, so flexibility when it comes to unexpected accidents is always needed.”

In China, 43% of the horses in the equestrian clubs are purchased from overseas and China spent over US$ 70 million on importing horses in 2015. Schwaab believes China should be able to launch more international breeding projects in the near future so that the industry could be more sustainable and independent. “China should join forces in the many opportunities of breeding successful show jumping mares and top class stallions in Europe.”, Schwaab said. As the country’s investment in the equine industry grows 15% to 20% per year, horse breeding is one of the most heated investments. In 2014, the US $2 billion Tianjin Equine Culture City project established a huge breeding operation in collaboration with Ireland.

It’s a both challenging and exciting journey for foreign horse experts like Schwaab working to bring China’s equine industry up to another level. With dedication and determination, Schwaab has become well-connected in China’s horse world. She emphasizes, “To see how the industry works on the other site of the world is a great enrichment.” Schwaab sets her goal to see more Chinese riders succeed in top events and promote show jumping all across China.